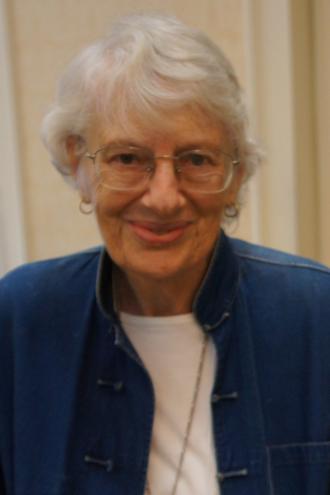 Anne Sturges, a Religious of the Sacred Heart for sixty-two years, was born on June 1, 1932 in New York City, the daughter of Ralph Alonzo Sturges and Elizabeth Corby Sturges.

A Sacred Heart alum, Anne graduated from the Convent of the Sacred Heart at 91st Street in New York in 1950. Following graduation, she enrolled in Manhattanville College in Purchase, NY, graduating in 1954 with a degree in History, and later a master’s degree in 1964. In 1954, Anne entered the Society of the Sacred Heart at Kenwood in Albany, New York. She made her first vows there on February 12, 1957 and her final profession on July 21, 1962 in Rome, Italy.

Anne spent her early years in the Society teaching English to elementary and high school students, followed by ten years at Manhattanville College in Purchase, New York, where she worked with students in campus ministry, as a student adviser and as director of student employment. A former dean of students at Harvard College wrote that “Anne is remarkable for the depth of her spirituality.” Anne took her role as student advisor seriously. She believed their employment opportunities gave students ways of committing themselves to their education.

The remaining years of Anne’s ministerial career were devoted to pastoral ministry. Working as pastoral minister at Fifth Avenue City Center and the Church of St. Michael in Coop City, the Bronx, New York, as staff chaplain at Odyssey Health Care in New Orleans, Louisiana, as a spiritual director at Sophie Barat House in New Orleans and as a hospice chaplain at Serenity Hospice Services in New Orleans, she developed deep and loving relationships with those she served. From 2003 until 2008, in response to a call from the province leadership that sisters give a time of service to our elder sisters at Kenwood in Albany, she was part of the pastoral care team there as well. She also served on the Board of Trustees at the Academy of the Sacred Heart in New Orleans from 2011-2014.

Anne’s gift of seeing beyond the obvious to what lay beneath was the result of her attentive listening, discernment and reflection. She was known for her candor, her lighthearted sense of humor and her deep love for the Society.

This past summer, Anne left New Orleans and moved to the Avila retirement community in Albany, New York. The onset of her final illness took her to Teresian House where, in the short time she was there, she made a lovely impression on residents and staff alike and people grew quickly to love her. She declined rapidly but through it all she was peaceful and looked forward to “going home.”  Surrounded by her sisters, Anne made her final journey quickly and died on the night of December 30.

Anne is survived by her brother, Ralph A. Sturges, III of Old Lyme, Connecticut, his wife, Janet, by her sister, Sarah Bancroft of Old Brokville, New York, by four loving nieces and nephews and by her sisters in the Society of the Sacred Heart.

A Funeral Mass will be celebrated on January 10 at 1:30 PM in the Teresian House Chapel in Albany, New York.   Burial will be at the Kenwood Cemetery.

Anne was my first teacher in

Wed, 2017-01-04 15:25
Anne was my first teacher in seventh class at Kenwood September 1959. She taught me the Sacred Heart way and I have been appreciative my whole life. She taught us to memorize poetry. Paslm23 and the Chancery Hand. We celebrated our 50 reunion with Anne at Doane Stuart in September 2016.

So caring and so gifted

Sr. Anne was something else.

Sat, 2017-01-14 02:56
Sr. Anne was something else. She was the kind of person that the more you watched, the more you learned, the more you refined yourself to be a better person. Discernment, yes. Reflective, yes. And patient. She had the patience of an artist who appreciates the beauty of every passing heartbeat. And yet...yet she had humor, brashness, and gusto. Rest in Peace Sister Anne.