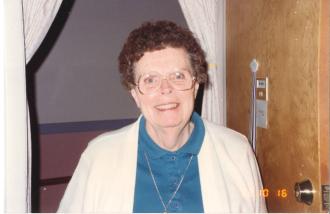 Born on March 15, 1921 in Boston, Massachusetts, Caroline was the youngest of three daughters of Charles Louis Arthur Desaulniers and Katherine Casey Desaulniers. The girls attended the Sacred Heart school first on Commonwealth Avenue, then in Newton, a tradition begun by their mother who was a devoted alum of Sacred Heart schools in Boston and in Providence, Rhode Island.

Caroline began to realize she had a vocation to religious life at a young age. However, she was encouraged to finish high school and college before entering the Society. Caroline began studies at Emmanuel College and graduated in 1943 with a bachelor’s degree in English.  Due to knee problems, which plagued her off and on all her life, she was asked again to wait a year before entering.  During this time she enrolled at Boston College to begin work towards a master’s degree.  Caroline entered the novitiate of the Society of the Sacred Heart on the pure conviction that God wanted her and made first vows in 1947 at Kenwood in Albany, New York.  She began her preparation for final Vows at the Mother House on the Via Nomentana in Rome, Italy in February, 1952 and made her final profession on July 30, 1952.

Throughout her life, Sr. Desaulniers was known for her love of music. A gifted pianist, she often entertained her various communities with lively tunes at special events and holidays. One of her community members at Pax Christi remembers her fun loving nature and positive outlook on life despite the physical hardships she suffered. Her presence brought a light to her community.

In December, 2007, Sr. Desaulniers moved to Tereisan House to begin her final journey. In her autobiography she expressed gratitude for what she considered a “very happy life with my beloved Spouse, Jesus” to whom she surrendered herself completely on Holy Thursday, March 24, 2016.

Sr. Desaulniers’ funeral Mass will be celebrated in the Teresian House chapel Wednesday, March 30 at 1:30 p.m., with viewing at 1:00 p.m.    She will be buried in the Kenwood cemetery.

Thu, 2016-03-31 11:13
I had a great time with Caroline at Newton Country Day School co-producing and directing a Gilbert and Sullivan review with 7th and 8th grade students. Her musicality was wonderful and her patience with me will never be forgotten. We had a great success with this production. I did not stay in the East but I have happy memories of that year.

Fri, 2016-04-01 02:54
My memories of Sister Desaulniers are those of a rather small 2nd grader (1947) at Prince Street in Rochester: she was very tall! Several years ago we had two lovely visits, both at Kenwood. We recalled her duty as the Mistress of the dormitory, when we were temporary boarders, and my younger sister would cry in the night, Sister would get up, get fully dressed, and go into the cubicle to comfort her! Little did we realize the extent of the dedication of our "Mothers". I am blessed by those memories now. She is surely resting in the arms of the Lord.