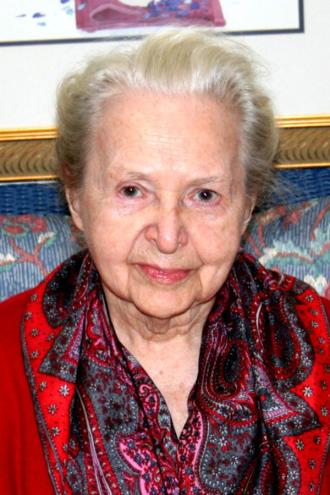 Born in New York, New York, January 18, 1914, Faine Moira McMullen was the daughter of John R. McMullen, Esq., and Anne Dunn McMullen. A graduate of Our Lady of Wisdom, Sr. McMullen entered the Society of the Sacred Heart in 1944 at Kenwood Convent of the Sacred Heart in Albany, New York, and professed her final vows on February 10, 1954. She received her bachelor’s of history from the College of Mt. St. Vincent in New York in 1934. In 1937, she received a law degree from Fordham University in New York and was admitted to the bar. She completed her master’s in history at Manhattenville College in Purchase, New York, in 1954.

Sr. McMullen’s early years were spent teaching in Sacred Heart schools, including teaching political science at Newton College in Boston, Massachusetts. In 1967, Sr. McMullen took a leave of absence from the Society so she could spend a year and a half experiencing the life of people in a poor and disenfranchised neighborhood of Boston. During that pivotal time, she shared, “I studied the poor who surrounded me. I grew to love them, and ever since their problems have been mine.” Through her work, she created and directed Manpower Training Program for the Boston Department of Health and Hospitals. She also was co-founder of the Planning Office of Urban Affairs for the Archdiocese of Boston. In 1974, she moved to Sursum Corda in Washington, DC, and began to practice law again offering free legal services to the poor.

Moving to Chicago, Illinois, in 1983, Sr. McMullen was active in creating The Triangle Park, which converted a triangle of city property into a private park and playground in a poor area of Chicago. She then moved to New Orleans, Louisiana, to serve as director of the Senior Advocacy Program, an empowerment program for low-income seniors. In her later years, Sr. McMullen continued to work with poor seniors on such issues as transportation and public housing.

In 1993, she moved to Kenwood, the Society’s elder care community in Albany, New York. Always a firebrand for justice and equality, Sr. McMullen continued to address and educate herself and others about issues of injustice. In 2006, she moved to Teresian House in Albany to continue her prayer mission.  As she wrote so eloquently, “I do not know what is next – nor am I at all concerned.  Life or death, work or rest, it’s all in the Lord’s hands.”

Wed, 2016-01-06 19:58
I was fortunate to meet Sr Faine at Newton College in early 60s and knew her in So Boston, Chicago, Washington,DC and Kenwood and Teresian House. She remained a mentor and friend for many decades. In many ways she was closer than my mother. She will be missed but I feel fortunate to have such a wonderful advocate in heaven watching over me.