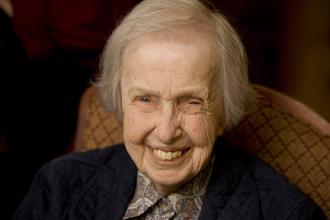 A religious sister for eighty-four years, Frannie, as she was known by her friends, was born on November 10, 1913 in Westerly, Rhode Island, and was the daughter of the Honorable Joseph Thomas Murphy and Annie O’Toole Murphy. Her only brother, Austin, predeceased her. Losing her parents at a young age, Frannie went to live with her two aunts, while her brother was sent to boarding school. An uncle, who was a priest, knew the Elmhurst Religious of the Sacred Heart and asked Mother Cody if the school would take Frannie. And so, along with her best friend who later joined the Society, Frannie enrolled at Elmhurst and began a relationship with the religious sisters there.  Frannie spent over ten years at Elmhurst and was very happy at the school and fond of the religious sisters who taught her. One, in particular, Mother O’Rourke made an impression on Frannie and the group of girls she taught.

Frannie’s long life of service in the Society was marked by her kind, empathic and joyful heart. Her generous and fun-loving spirit were felt by her students, her colleagues and her Sisters. All who knew Frannie came away refreshed and happier for knowing her. As her years drew to a close, she longed to go to heaven and slipped quietly away on March 31, 2016.

A Funeral Mass will be celebrated on Monday, April 11, at 11:30 a.m. in the Teresian House Chapel in Albany, New York.  Burial will be at the Kenwood Cemetery.