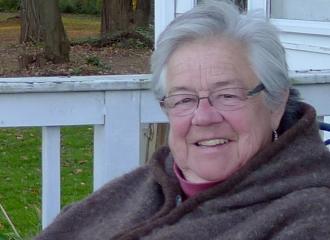 Born on January 30, 1940 in Chicago, Illinois, Georgie as she was affectionately known, was the daughter of Anthony Blaeser, Sr., and Georgianna Blaeser.  She is survived by her brother James (Ellen) Blaeser and her beloved niece, Georgie.  She was the youngest child in her family and after losing her mother at a young age, Georgie’s older sister Joan became her virtual mother.  The loss of her mother, plus her father’s remarriage and Georgie’s displacement, left deep holes in her life.  She was sent to Lake Forest as a young child to the boarding school and found there a sense of family and mothering that was missing from her home life.

Georgie graduated from the Convent of the Sacred Heart, in Lake Forest, Illinois and after high school attended San Diego College for Women.  She entered the Society at Kenwood in Albany, New York in 1960 and made her first vows in 1963 at Kenwood.  Georgie went on to Duchesne College, in Omaha, Nebraska where she earned a bachelor’s degree in English and then made her final profession in 1969 at the Mother House in Rome Italy.   She earned two master’s degrees, the first a Master of Fine Arts from Northwestern University in Evanston, Illinois, and, a Master in Educational Administration from the University of Notre Dame, in Notre Dame, Indiana.

Georgie’s ministry history was wide and varied.  A consummate educator, she had a sense of adventure and was not averse to taking risks!  At the age of fifty-nine she decided to leave the formal classroom for Sprout Creek Farm.  Without the knowledge of what it took to work on a farm, she forged ahead putting everything she had into the process of learning what needed to be done.  The most important thing for Georgie was the process, the experience of trying, and not the product.  In this way, her spirit was open, light and true.    Georgie had a work ethic that ran parallel with her adventuresome spirit.  There was nothing she wouldn’t do from staying up all night waiting for the birth of two lambs to serving on countless province committees.  She did all with the same spirt-filled grace that she brought to every encounter.

For the past sixteen years, Georgie served Sprout Creek Farm as education and program director spearheading numerous programs for children and adults.   She produced the Sprout Creek Farm’s yearly calendar introducing folks to so many of the creatures who made up the Kingdom.  Georgie was often seen driving her mini tractor which she thoroughly enjoyed!  She was also a photographer and the farm inspired much of her work.  As Georgie shared in a presentation she gave at Woodlands Academy in 2012 (excerpted in the Spring 2012 issue of Heart Magazine), photography taught her to see what is actually there without judgement.  The canvas of the natural world, “shouted out to me, “We are looking at you.  Don’t miss out, because each moment is the only one you have to take in the truth of what it means that we see you.  Notice us and worlds will open to you.”  Georgie described Sprout Creek Farm as “magic with light,” an “inspiring place where people learn to grow and shrink a little at the same time.”  She captivated her audience at Woodlands that day where the girls loved her.

Georgie is best described by her Sisters in the Sacred Heart, family and friends by how she made them feel and her sense of humanity.  She listened. She cared, and she loved.  Georgie mentored many students and young adults over the years, including many of her religious and lay colleagues, all of whom were drawn to her strength, sense of humor and humility.  In a talk that she gave at Carrollton for an annual celebration of the special relationship between mothers and daughters, she speaks of the vision of St. Madeleine Sophie for young women of her time and the challenges that we still face in living up to that vision.  Georgie talks about the “we” and “they,” and how a lack of compassion can turn to judgement as we can exhibit the same objectionable behavior we see so easily in someone else.  In her humble self-effacing manner, Georgie recognized how precious and fragile life is and how this day is all that is given to us.  She was truly present to this life, its joys and its sorrows.

For the past three years, Georgie has been battling lung cancer, again setting her mind to what needed to be done and living life to the fullest. Georgie loved to cook, serving up gourmet meals right up to a week or two before her death. Georgie was into nurturing the land, the child, the animal, the belly, her eye, her love of literature and writing with the wonders of creation.

Georgie’s final journey home took place on June 1, 2016, when she surrendered the pain and the suffering of her battle with lung cancer.   She was blessed with many visits from her brother, Jim and his wife and her niece, Georgie and many friends over these years.  In her final hours she was held close by her Sisters, Meg Causey and Margo Morris.

At Georgie’s request, a Memorial Mass will be held in September after the summer camps conclude.

Memorial Contributions can be made to the Georgie Blaeser Education Fund at Sprout Creek Farm, 34 Lauer Rd, Poughkeepsie, NY 12603

Sat, 2016-06-04 21:57
What a great loss! We worked together at Glen Oak/Gilmour Academy in Gates Mills, Ohio where she was deeply loved and admired. We stayed in contact while she was later working in Chicago.However, we lost touch over the years. She was a great person and I am very happy to have known her.

Fri, 2016-06-10 12:18
I was saddened to hear of Georgie's crossing. My thoughts and prayers are with Sprout Creek, Margo, and Jo...as well as the RSCJ community. Georgie always held a sense of inclusion and humor.

My sincere condolences to

Sun, 2016-06-12 21:34
My sincere condolences to Sprout Creek, Sister Margo and the Siciety of the Sacred Heart Community. I will forever be grateful to Sister for teaching me about goats during kidding season at Sprout Creek. I will always be thankful to her for telling me that the boy goats make awesome pets for that they do as I have two boys and one girl from my very first kidding season at the farm. Sister was a wonderful and caring person. She loved her goats and their babies and the cats. During kidding season I always remember what she taught me. I'm am so grateful for having known her. Again my deepest sympathies.

Wed, 2016-07-13 10:05
I was so sad to hear of the loss of Georgie. My deepest condolences go out to Sprout Creek Farm, the sisters of the Sacred Heart and all whose lives Georgie graced with her spirit. I first met Georgie during the summer of 1989 in Houston TX for the inaugural Summer Service Project. I was young and so moved by the work we were doing. I had endless questions, few answers and lots of big emotions. Georgie listened with thoughtful patience and honored everything I thought and felt. I grew closer to her several years later during the 1991 Summer Service Project in Miami when the young women worked at the Barnyard and lived in the RSCJ house. I feel so lucky to have known her if only for brief moments in time. Thank you Georgie for being authentic and sharing your spirit with others.