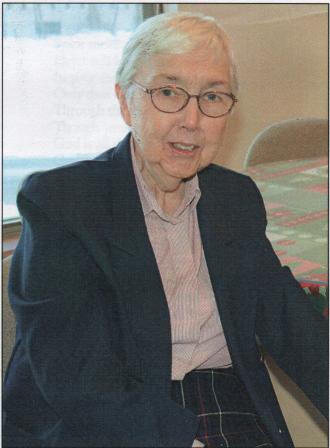 Mary Louise Burke-Gaffney, RSCJ, was born in Winnipeg, Manitoba, daughter of Patrick Burke-Gaffney and Mary Henebery, both of whom had come from Ireland. The only daughter in a family of four boys, she with her brothers attended St. Ignatius parish school. Her high school education was at the Convent of the Sacred Heart in Winnipeg. Then, after a year in Montreal, she attended Maryville College in St. Louis, Missouri, obtaining in 1948 a B.A. with a major in physics and a minor in mathematics.

In September 1949 Mary entered the Society of the Sacred Heart at Kenwood and made her novitiate under the direction of Marie Louise Schroen. She made her first vows there on May 5, 1952, and was sent to the classroom at Sault-au-Récollet for the next four years. The variety of her teaching assignments during these and many years to come reveals the breadth of her abilities: teacher of mathematics, physics, English, history, and Latin, besides liturgical singing and duties as librarian. In 1956, she returned to Kenwood for one year of black juniorate before going to Rome for probation under the direction of Reverend Mother Zurstrassen. She made her final profession there on February 10, 1958.

The same year, she received the M.A. in Education from Manhattanville College. She taught Mathematics and Latin and directed several sodalities in Winnipeg from 1958 to 1965, then in Halifax 1966-1968, then she was back to her home city of Winnipeg 1968-1969 for study at the University of Manitoba. Her interest in library work blossomed there as well, and the next year found her at Vancouver for a degree in Library Science from the University of British Columbia.

For the next four years she was a public school librarian at Sturgeon Creek Regional Secondary School in Winnipeg, then in the school in Vancouver, along with Mathematics classes 1974-1977. The next three years brought a very different ministry as a provincial team member with provincial Agnes Lahey, living in Montreal. After a year of theological study in Toronto, she was back on the provincial team 1980-1982 with provincial Mary Power. Then it was more study at Dalhousie Library School and Atlantic School of Theology.

From 1984 to1987, Mary was librarian for the Ecumenical Forum, in Toronto, while also serving as local community treasurer. In 1987, she was back in Winnipeg as executive secretary of the Canadian Religious Conference - West. After a year of renewal in 1994 in Edmonton, Saint Louis, and Montreal, she served as catalogue librarian for the Ecumenical Centre in Montreal, 1994-2008, while she was a member of the Montreal St. Thomas More Centre for Adult Education, where she eagerly pursued contemporary philosophical trends.

Sister Burke-Gaffney was a life-long student, a lover of education, and she considered herself fortunate to have studied theology at Regis College in Toronto and at the Atlantic School of Theology in Halifax.

Wherever she was located, Mary was eager to assist in the local church. In the Vancouver Sisters’ Conference she worked on the Social Justice committee and similarly in Montreal.

Mary moved to Barat Residence, Halifax in 2008; after a fall on July 1, 2013, she went to nursing care first at Northwood, then Parkstone Residence in Bedford, Nova Scotia, where she died on November 8, 2016.

Sister Burke-Gaffney was predeceased by her parents and her four brothers: Ted, Desmond, S.J., Frank, and John.  She is survived by numerous nephews and nieces, all of whom she loved dearly and for all of whom she prayed devotedly.