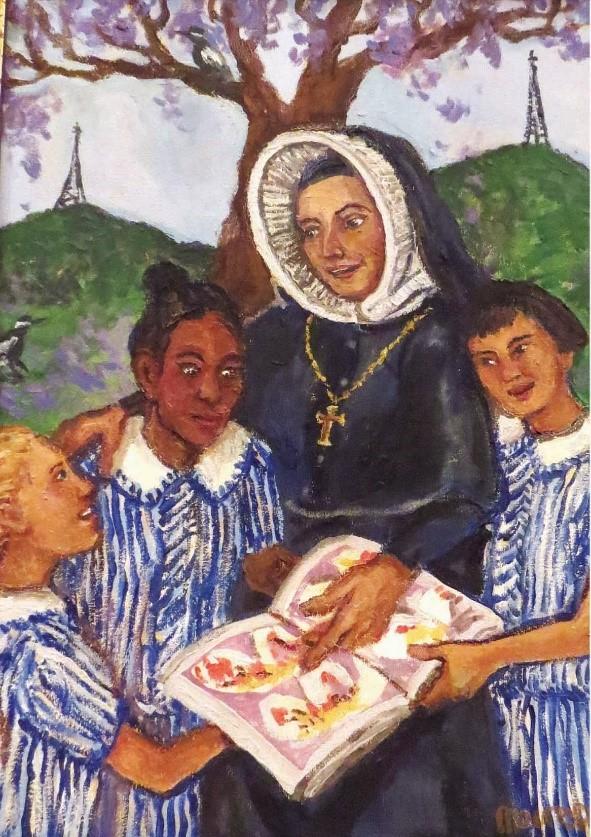 Despite growing up in St. Charles, Missouri, and attending the Academy of the Sacred Heart where Saint Philippine is buried, I always felt closer to the Society of the Sacred Heart’s founding mother, Saint Madeleine Sophie Barat. It was at Sacred Heart that I first came to care about my faith, after seeing the joy on the face of one of the RSCJ there as she prayed during a school Mass. It inspired me to try to pray, quieting myself and listening closely, letting myself sink deeper and deeper into God’s love.

I was no expert on Madeleine Sophie — I still am not, though I now understand much more about her social and historical context than I comprehended as a child — yet Sophie has continued to make herself known to me. Shortly after that first endeavor into contemplation, I had a dream in which Sophie sat with me silently for a long time before finally telling me, “The Fountain will feed you; it will give you all you need.” The Fountain, of course, being the heart of God.

Years later, attending a Jesuit university and working for a Jesuit magazine, I would come to see a parallel between Sophie’s words and Saint Ignatius’ “suscipe,” the powerful, radical prayer of abandonment that comes at the end of his Spiritual Exercises: “Give me only your love and your grace; that is enough for me.”

There is no denying the influence that the Jesuits had on Sophie Barat. After her family abandoned Jansenism and her brother Louis, who had educated her, joined the Society of Jesus, it was a Jesuit, Fr. Varin, who asked Sophie to form a women’s religious order to revive devotion to the Sacred Heart in post-revolutionary France.

Although Sacred Heart spirituality has developed along a different path than Ignatian spirituality (and rightfully so) since then, I am struck that the fundamental spiritual journey that both saints outlined remains clear enough that it could be communicated, almost in its entirety, in that first encounter I had back in St. Charles. That is, that we encounter God in prayer, come to know ourselves as deeply loved by God, and are so moved by this experience that we feel we must share that love, no matter the cost, knowing that God will sustain us.