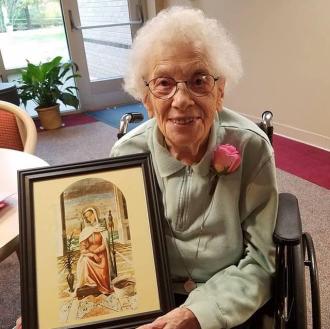 Annette Zipple was born in Lansing, Michigan, August 22, 1923, the third child, and only daughter of Anna Frances Malik and Karl George Zipple. She grew up in Lansing with her four brothers, Karl, Matthew, Francis, and John. Throughout her life, Annette heard her mother speak about the Religious of the Sacred Heart as she attended a yearly retreat at the Convent of the Sacred Heart in Grosse Pointe, Michigan, and was deeply influenced by the spirituality of the Sacred Heart.

After high school in Lansing, Annette attended the College of Mount Saint Joseph in Cincinnati, Ohio, graduating in 1944 with a major in Bacteriology and Chemistry. Upon graduation, Annette completed an internship at Good Samaritan Hospital in Detroit to become a registered medical technologist. She worked at as a medical technician in virus/bacteriological research at the University of Michigan, working with Dr. Jonas Salk, later at Parke Davis. During these years, Annette began to experience a call to a deeper way of knowing and serving God, but without any specific direction. She visited the Capuchin Monastery across the street from the work place, spending many lunch breaks and hours after work and on the weekends sitting outside the monastery, determining who of the many waiting in line would be admitted to see Father Solanus Casey. During those years, she watched as he laid hands upon children and those suffering illness of body, mind, and spirit who experienced healing. As a medical technologist, she knew that the healing was not due to medicine; it was the spiritual healing of a miracle. The simplicity, prayer, and open heart of [Blessed] Solanus Casey was transforming for Annette, and she began to listen more deeply to the call in her own life.

Annette began making retreats with the Sisters of Mary Reparatrix in Detroit. During one of those retreats, she experienced a call to religious life. She thought she would enter with the Sisters of Mary Reparatrix, strictly cloistered at the time; but when she spoke with the priest giving the retreat, he told her definitely that she should go to Lawrence Avenue (Convent of the Sacred Heart) and speak with Reverend Mother Betty Hill, RSCJ. Annette described, “It was a real desire to have my life out of my own hands and in the hands of God—more a pull than a push.

In that first conversation with Mother Hill, Annette shared her experience and was sent to the chapel to pray about it. She knew already that there was something missing in her life, but when she went into the chapel, an extraordinary peace came over her. When she left the chapel, she told Mother Hill that she knew that she should enter. It was the year of the centenary of Philippine’s death; she was given a book and prayed to Philippine and within the month was headed to Albany to enter the novitiate at Kenwood. At that moment, Annette knew nothing of the customs and traditions or even the charism of the Society. She began following a passion that she understood as inspired by Philippine, and she maintained her commitment throughout her life.

When Annette entered the Society at Kenwood, in 1952, she was of 29 years old. Because of her age, and her training as a medical technologist, the mistress of novices, Marie Louise Schroen, named Annette head of the novitiate infirmary. She experienced in the infirmary a side of people that others did not always see: she cared for people in their most vulnerable moments; sometimes she sat with homesick novices; sometimes she would receive counsel from Mother Schroen on her way to the chapel or at a moment of some concern. Annette remembered the day she was struggling with whether she could teach in a secondary school and Marie Louise told her not to get boxed in if that was not her call. Annette remembered words of hers that would mark her life, “The world is bigger than the convent, Annette, and you have lived in a place and you have to remember that you are part of the cosmos—of something bigger.” It was always a search for where God was. She remembered also sitting with Reverend Mother Bodkin who was becoming increasingly ill; she listened as Mother Bodkin shared with her the journey to becoming one with God.

Annette made her first vows on August 15, 1954, and was promptly named surveillante of the novices, the person responsible for supervising the daily life and work of the novitiate. For the last year of her aspirantship (the period before final profession) she was sent to teach at Prince Street in Rochester, New York, before going to probation in Rome. She made her final profession on July 21, 1960, after which she was sent to Manhattanville College to be house warden, the person in charge of the housekeeping for the college. In 1966, Annette was sent to the Convent of the Sacred Heart, Grosse Pointe, Michigan, as assistant to the superior. She loved the students and faculty, but always aware of the turbulence in the city; she felt deeply called to be present and serve those most in need in the city of Detroit. She would serve the city for the next fifty-four years.

With the blessing of a wise superior, Helen Healy, RSCJ, Annette started down a road that would shape the rest of her life and lead her to become a pioneer and champion of those often overlooked, underserved, and without access to the basic necessities of human life. Her desire to work with the African American and Latino families in the city took shape in an exceptional summer program at Grosse Pointe called Sacred Heart Enrichment Program (SHEP). She linked with friends and her sisters from the Academy of the Sacred Heart in Bloomfield Hills, Michigan, as well as those in Grosse Pointe.

SHEP would become the model for outreach programs in Sacred Heart communities around the United States, linking resources, opportunities, and most of all children, in experiences of music, dance, art, and relationships. The graduates of SHEP programs continue to mark those summers as life-changing, breaking down walls of racism and opening new ways of thinking and being.

In 1972, Annette completed a degree in social work at Wayne State University and began her work as a professional social worker serving as the Coordinator of School Social Work Services for the Archdiocese of Detroit, which led to her spiritual and ministerial home. In 1974, she began her ministry with Most Holy Trinity Parish as the coordinator of social work services and the director of community services. As an integral member of the parish team, Annette knew that building bridges of relationship between communities was the key to real change. Through her work at Holy Trinity, Annette accessed resources for those who were housing or food insecure in Southwest Detroit and the wider regional community. Annette insisted that the Society of the Sacred Heart live out its commitment to racial and economic justice, refusing to remain silent in the face of inequity and discrimination. If there was an important issue, election, civil rights march, immigration challenge or need for prayer to be present at the place of conflict, Annette Zipple was sure to be there. Trusting in the support of her family, her friends, and her RSCJ sisters, Annette believed she was born to be the ambassador for the Religious of the Sacred Heart to the city of Detroit.

She rejoiced in her years of service in the city with her great friends, especially Mary Elizabeth Fisher and Martha Curry, and delighted in sharing the mission with these women. Annette worked with the RSCJ in the area and with members of five religious congregations to found and co-sponsor a middle school for girls in Southwest Detroit. Although the financial downturn affected its longevity, Our Lady of Guadalupe Middle School for Girls was an outstanding, innovative school and a new educational model. Annette and local RSCJ also worked with the Felician Sisters of Madonna University, with the financial support of the Fisher family, to found Southwest Women’s Educational Empowerment Project (SWEEP) in Southwest Detroit, assisting women seeking degrees in social work.

After more than fifty years of service, Annette recognized that the time had come to slow the pace of work, but was fiercely convinced that God continued to call her to the city of Detroit. In October of 2015, Annette moved into McAuley Center with the Sisters of Mercy in Farmington, Michigan. There, she joined lifelong friends, women of great love in her final commitment to the city of Detroit. Through prayer, vibrant connections, and the fidelity of her family, she continued her love and passion for the city and her desire to see change happen through the connection between and among people of heart.

On May 13, 2020, Annette died quietly at Mercy Center in Farmington with Sisters of Mercy and her beloved city around her. Annette leaves behind generations of Detroit women and men touched by her love, her passion, her relentless vision and her faith. She leaves behind her dear brother Francis, his wife, Kathy, nieces and nephews, grand and great nieces and nephews, friends who hold her as family, and her sisters in the Society of the Sacred Heart.

We, the Religious of the Sacred Heart, lost a champion of love. One devoted to the warrior spirit and pioneer love of Philippine Duchesne, whose strength and tenderness intertwined in action grounded in the Gospel. All the angels and saints must rejoice with the presence of Annette, as we experience the absence of this great woman of heart.

A Memorial Mass will be held at a later date.