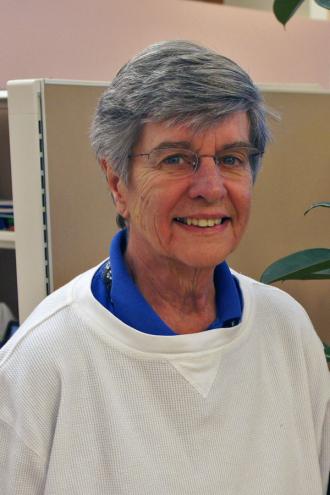 Religious of the Sacred Heart, Carol Ann Haggarty, died June 18, 2017, on the Feast of Corpus Christi, in Atherton, California.

Carol Haggarty, a Religious of the Sacred Heart, was born on September 14, 1941, in Chicago, Illinois, to Frank Joseph Haggarty and Marian Grupe Haggarty. One of three daughters, Carol grew up with her sisters Joan and Mariclare. Mariclare died in 2013.

An alumna of Duchesne College, Omaha, she earned a BA in Education in 1968. She completed graduate studies at the National College of Education in Evanston, Illinois, in 1975, earning an MA in Administration and Supervision. She completed a second MA in Counseling Psychology at Loyola University in Illinois in 1979.

Her other ministries included being area director for the St. Louis/St. Charles area for thirteen years, and for a number of years she served as director of the Associates in St. Louis/St. Charles. Carol was the go-to person for everything technological; she was also a beautiful photographer capturing the seasons in all of their beauty.

Carol’s most recent ministry was that of assistant to the provincial, when she returned to the provincial office in 2012. This role also included managing the provincial office scheduling, hospitality and numerous other jobs. She was the “glue” that held the office together and was the “go to” person for the provincial house staff who came to love her.
Shortly after the first of the year 2017, Carol learned that her cancer had returned and she fought valiantly. When the cancer spread, she made the decision to forgo further treatment and move to Oakwood to enter hospice care. Carol’s departure in March was heartbreaking for the provincial staff. As they each said their goodbyes to her in the hospital, her parting words were “to be good to each other.” Carol is remembered for her ability to bring people together through her loving spirit and her wonderful sense of humor, which put everyone at ease. Her blue eyes, a window to her soul, reflected a clarity and goodness that drew others to her. We all remember her humor, kindness, gentle and generous spirit. Carol was a wise and inspiring companion on our journey. The words from Father Duffy about St. Philippine Duchesne are perfect ones for Carol: “What have we learned from her? The value of a steadfast purpose, the success of failure and the unimportance of our standards of success, the power of grace released by deep, divine desires and simple duty daily done.” Carol’s deep spirituality permeated everything she did. She was a student of the Gospel of St. John and prayed with and lived his gospel for many years. John 15, “As the Father has loved me, so I have loved you. Remain in my love…love one another as I have loved you.” Words Carol left us to live by.

Sister Haggarty left St. Louis and was received into the loving arms of her sisters at Oakwood, in Atherton, California, who cared for her over the next three months. She was often seen riding her scooter on the grounds at Oakwood and participating in the community life of liturgy, prayer, meals and activities as much as she could; she kept in touch with the provincial staff, RSCJ, friends and family by email and phone. Early in the morning on Sunday, June 18, Sister Haggarty’s battle with cancer came to an end when she slipped away very peacefully into the arms of her Beloved.

Sister Haggarty is survived by her sister Joan Eggers (Jim), her nieces and nephews, Michael Eggers (Leslie), Carol Eggers (Brian Haynsworth), David Eggers (Nadia), Susan Eggers (Robert Goldman), Kathryn Eggers (Steven Trumpeter), Paul Eggers (Kristin Krupa), and her eight great nieces and nephews, Michaela and Andrew Eggers, Charles and Nora Haynsworth, Maggi, Louise and Rosie Goldman, and Daniel Eggers. She is survived also by her sisters in the Society of the Sacred Heart. Carol loved her family and enjoyed being with them during the holidays and other special times.

A Memorial Mass will be held on July 22 at 10:00 a.m. at the Oakwood chapel in Atherton, California.

Memorial contributions may be made to the Society of the Sacred Heart, 4120 Forest Park Avenue, St. Louis, Missouri 63108.

Thu, 2017-07-20 22:48
<p>I had the great privilege of serving for several years with Carol on the Board of Trustees at the Academy of the Sacred Heart in Grand Coteau, Louisiana &nbsp;and of continuing to work with her for the Academy during the years she served there as Headmistress. &nbsp; Her &nbsp;calm commitment, her deep spirituality and her devotion to the Sacred Heart family were always an inspiration. &nbsp;I know that she will continue to guide and protect it now. &nbsp;I am feeling deeply saddened for those of us left behind as her dedication will be greatly missed as will her example for new generations of Sacred Heart students. &nbsp;I pray that she will rest now in the peace of the Lord.</p>