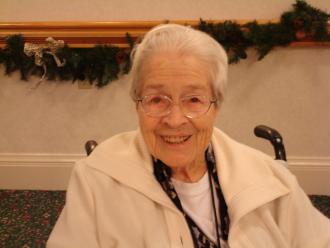 A Religious of the Sacred Heart for seventy-seven years, Virginia Schumann, known affectionately as Ginny, was born on December 8, 1915 in Brooklyn, New York, the fourth of five children of Mary A.Griffin and Carl J. Schumann.  She was preceded by Catherine, Miriam who also became an RSCJ, and John. Barbara followed Ginny. As the second youngest, Ginny fondly remembers her early years walking to the parochial school and being taught by the School Sisters of Notre Dame and describes her household as secure, loving and caring providing a solid Catholic foundation. Summers were spent at a lake house in Connecticut where Ginny had many opportunities to grow in the knowledge and love of nature and would often attend daily Mass. Summers also included time spent at camp.  This experience prepared her leaving home for high school when Ginny was sent to Kenwood boarding school. She loved Kenwood and was not homesick! It was here that Ginny felt the stirrings of a vocation to religious life. After graduating from Kenwood, Ginny attended Manhattanville College in New York City, graduating with a BA in Math.

She entered the Society of the Sacred Heart at Kenwood in 1937 and made her first vows there in 1940.

The next five years were spent teaching at Maplehurst, in the Bronx, New York.  In 1945 the school moved to Greenwich and Ginny went on to prepare for her Final Vows at Kenwood in Albany, New York which she professed on February 11, 1946. (During the war years the religious who normally would have gone to Rome made their Final Profession of Vows at Kenwood.)

She went to Eden Hall, a boarding school in Torresdale, Philadelphia. She was Principal of St. Katherine Parish School located on the grounds of Eden Hall.  Here she also taught Math and Religion.  In 1957 she was sent to Elmhurst, Providence, Rhode Island.  When that school moved to Portsmouth, in 1961 Ginny continued ministering there.  Besides teaching Math, she was Treasurer of the school and of the community. Alumnae of that period attest to her loving care and excellence as a teacher, a model for some who later became teachers themselves. After two years at Overbrook in Philadelphia, she returned to Elmhurst in 1969 where she taught until Elmhurst closed in 1972.  Then  she was delighted in 1972 to be teaching at Newton Country Day School, Newton, MA, a position she held for the next sixteen years remaining there as a tutor until 1993. During that time Ginny worked at Project Hope, a shelter founded by the Little Sisters of the Assumption in Dorchester/Roxbury; she was able to form relationships with women whom she helped to receive their GED diplomas. When she moved to Kenwood in 2006 she felt torn leaving the Adult Learning Program at Project Hope and her second grade math students in a Newton public school. However, now pushing a walker, she realized her body was ready for some rest.

Also during these years in Newton she became affiliated with the Focolare Movement through its members nearby. Until the end of her life she received communications from this precious enrichment to her own spiritual life. Hanging over her bed was a picture of their Foundress, Chiara Lubich. Ginny treasured the charism:  That they all may be one.

When Sr. Schumann moved to the Teresian House retirement residence she did so with gratitude, knowing that she had always been loved, although, in her words, she “never spent much time with the concept.”  “I know in my whole being that it is love which motivates me as I go about living here, and that love is God.”

During Holy Week Ginny was her usual loving self. On the morning of April 12th, she slipped away in her sleep to spend her Holy Week and Easter with God.

Immediately following the Mass her body will be taken to the cemetery at Kenwood for burial.

Sun, 2017-04-23 23:13
<p>Our family has wonderful memories of Sister and her profound influence while teaching math and Principal at St. Katherine's parish school in the 1950's. She embodied the necessary qualities to achieve success in her dual roles and displayed a deep attachment to her students and parents. As principal she emphasized discipline and mutual respect in the classroom and during recreation. I remember so well how she would keep a watchful eye on us during recreation periods and encouraging us to enjoy whatever game we were playing. She never missed a beat. Her greatest influence was in her role as my math teacher from sixth to eighth grades. We had a very small class and Sister challenged us each day with math and even basic algebra problems in seventh and eighth grades which we had to solve as quickly as possible and which provided a solid foundation for high school mathematics. She really loved seeing her students develop an interest and grasp of math concepts and advance as students. The Scred Heart order was enriched with outstanding educators and they made their mark on their students at St. Katherine's and Eden Hall.</p>

Tue, 2017-04-25 12:07
<p>May perpetual light shine upon this wonderful teacher.&nbsp; Her cheerful personality and consistent encouragement lit our way as students.</p>

Thu, 2017-04-27 22:42
<p>Sister Ginny, You will always hold a special place in my heart, having the oppurtunity to take care of you was a true blessing. I know that you are where you want to be now. I appreciate all you taught me and I will sincerely miss you.</p>

My favorite teacher ever

Tue, 2017-09-05 23:00
<p>Sr. Schumann was my all-time favorite teacher! Although she could be tough as nails, her deep caring for her students and love of teaching radiated from her. I was the smart, ADD kid who never did her homework but loved to learn...Ginny somehow always managed to find just the right balance between discipline and encouragement. She left her mark on my heart.&nbsp;</p>